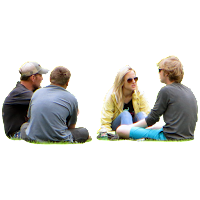 I was recently meeting with a group of friends. We were talking about having lovingkindness for all beings. I was talking about my feeling of connection with all that exists, with all other beings. They were complaining that they don't feel this connection, especially with people with whom they disagree or they don't like. But I assured them, it's there.

I asked them to try this exercise with me. We sat in a circle facing each other. Feet firmly planted on the ground. Eyes closed, body relaxed. I asked them to hum a mantra or chant. We used the syllable Ohm. There's nothing magical about that syllable, you can use anything you want. But that ah sound is deep and rich and resonates well within your body, and if you're in a room with good acoustics, it resonates beautifully in the room. We happened to be outside.

So I asked them to repeatedly chant this sound along with me. We sat silently and chanted the syllable several times. I asked them if, as they were listening to the sound being produced by those around them, if this made them feel more connected to those individuals. We sat and chanted some more. As I listened to the person next to me, the energy of the sound connected with my hearing apparatus. Light and sound are both energy. They produce waves that are sent out and connect with other beings. When you see another person, light is bouncing off their bodies and into your eyes. When they make sound, that energy wave is being sent out and connects with your ears. You are literally connected to them.

The point is, you are connected to every other being in ways you can't consciously perceive, but they exist nonetheless.

As we sat chanting, we became aware of this connection because the sound allows us to perceive the connection. And after the chanting, those who participated said that yes, it did help them feel more connected to those around them.

I encouraged them to realize, next time they are hearing someone talking who is saying something they don't like, or they think about someone they've had conflict with or simply don't feel connected to, realize that you do have an imperceptible connection to that person. You can leave the room, turn off their voice, put them out of your mind, but you are still connected. You need to find a way to deal with your feelings toward them because you can't sever that connection, and you'll be unhappy the rest of your life by being connected to people who you feel negatively towards.

You can't change the fact that you are connected. You can only change your own reaction toward this connection. It's really the only chance you've got to be happy.

You can't even alleviate it by becoming a hermit, because even when you're alone, the connection to the rest of the human race is still there.

You were born into a network of imperceptible energy connections. The chanting only highlighted and made that connection perceptible for you. If you've ever had a thought about that person, that thought is in your unconscious mind, so even when you're not consciously thinking of them, you are connected to them unconsciously.

So you better get some happy thoughts about that person, or you'll be miserable the rest of your life.

How can you have happy thoughts about a person you don't like? It's not hard at all.

But you say no, it's not just a story. And you start recounting all the bad things they've done. But the past is just a story. It's not happening now, it's over. The past is not real. It's only in your imagination. You keep it alive by continuing to think about it and characterize it as bad.

What happened in the past doesn't matter. It's just a movie that's playing in your head.

You might say "That person is hurting me by saying x, y, z. They shouldn't be doing that."

Can you absolutely, positively know that it's true that they shouldn't be doing that?

They're not saying anything to you right now. You're just remembering something that was said in the past. And the past isn't real. So in real time, right now, nobody's hurting you. It is absolutely not true that they are hurting you. Only your memory is hurting you. The thoughts you insist on clinging to are hurting you.

Let's imagine they are saying "You never take responsibility for anything that's your fault." Now, if you aren't able to think the thought "They shouldn't be doing that," what would you be thinking about what they're saying? Answer this question for me. Has there ever been a time when you didn't take responsibility for something you did? I think we could all say that yes, we've done that at one time or another. So that person is speaking the truth to you, but you push that truth away by saying they shouldn't be telling you that. It's just a defense mechanism.

If you weren't thinking the thought "They shouldn't be doing that" you'd be able to see where the other person is coming from. And that would make them more human to you. That would make you both able to connect. Then you'd be able to respond by saying "Yes, I can see that, and I'm working on that." What would be so wrong with that? It's so important for us to be right that we're willing to make the other person wrong every simgle time in order to feel better about ourselves. Except we don't feel better. Remember, when you think "They shouldn't be saying that" it doesn't feel good.

The goal is to see things clearly, and by doing so, relieve stress and suffering so you can feel good. Blaming doesn't feel good.

You are no more perfect than the people you don't like.

We are all the same.

No, but you've done other hurtful things. We all have.

The fact that you can acknowledge that we are all the same, we are all imperfect, we are all on a level playing field. There's nothing unfair happening. It's just your story, your illusion, to make youself look good.

When you truly see that, all the disconnection falls away.


Posted by Judie McMath at 1:08 PM No comments: